Making Those Strings Sing (In Tune!)

Stringed instruments have been around for thousands of years.  Stretch a tight string over a hollow shape, and you get a nice acoustic instrument; sixty years ago New Jersey musician Les Paul invented the electric guitar when he figured out how to get steel strings and solid body guitars to generate even louder sounds.

It all starts with strings

We’ll assume you are playing an electric guitar, so your strings are made of steel (or are a soft core wrapped with a thin wire for those thicker, lower strings) – we’ll come back to why electric strings are always steel when we talk about pickups in a few weeks.  Strings are nothing more than big, simple springs — when you pluck a string, it vibrates back and forth like a spring that you pulled, and slowly the vibrations die down and the sound stops.  The pitch of a string is how fast it vibrates back and forth, and that pitch is determined by exactly two things: how long the string is, and how much it weighs.  Longer strings sound lower (notice bass guitars have longer fretboards than regular guitars), and heavier strings sound lower (those thick lower E and D strings sound lower than the higher G string, even though they’re the same length on your guitar).  When you play higher and higher frets on your guitar, you’re making the string shorter (measured from the fret to the bridge) so it sounds higher.

Note that it doesn’t matter how *hard* you pluck the string – it will sound louder and take longer for the vibrations to die down, but it’s still the same pitch.  It’s all about weight and length.

Now that you have about two weeks of college physics under your picks, we can think about tuning those guitars and keeping them in tune.

Standard guitar tuning is E-A-D-G-B-E.  While you can tune your guitar by matching the tone of each lower string at the fifth fret to the next higher string (except for the G-B strings, which require using the 4th fret on the G string), using an electronic tuner is easier, and makes sure your first or reference string is also in tune (you don’t want to tune the entire guitar off because your low E was a little flat).

Bass tuning is E-A-D-G, one octave lower.  On a five-string bass, you add a low B string, on a six string you add a high C string (this is where bass and guitar go their separate ways, especially if you’re John Myung from Dream Theater).

(An oldie but goodie: the Boss Chromatic Tuner shows that the “D” string is a little flat) 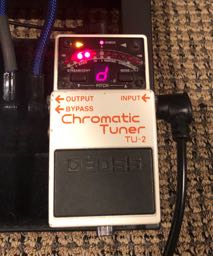 As you’re looking at the tuner, turn the tuning peg tighter to adjust a flat string, or loosen it a little to bring a sharp string down.  Most tuners will give you directional hints — arrows pointing toward a center dot or light to show if you’re above or below pitch — and many give you a frequency count as well.  When you tighten the string, you’re making it a tiny bit shorter — shorter strings have higher pitch!  You may find it easier to tune strings that are a little sharp by loosening the tuning peg below the desired pitch, then tightening up gently back up to pitch.

What makes your guitar go out of tune?   Just about everything.  Maybe you bumped one of the tuning pegs putting your guitar back in its case or taking it out.   If your guitar is cold, it will be flat because the body and neck shrink a little and make the strings looser; if you tune it up cold it will get progressively sharp as it warms up from being played.   Changes in humidity also affect the shape of the neck and body to cause small changes in tuning. As you play, your strings gently wear out and stretch a bit, and will get flat or refuse to stay in tune after a while.

When you hit the point where your strings aren’t holding a good tuning, they sound dull or muddy, they feel grimy, show spots of rust, or have slight dings in the wraps (or worst case: you break one!) it’s time to change your strings.  We’ll pick up next time with selecting and changing strings.

(A really vintage tuner – the “harmonica style” Boss tuner has a VU meter instead of LEDs to indicate flat/sharp tuning, a low/high octave selector, and LEDs to indicate the string’s note.  Clip-on tuners will give a much more usable experience)

Loudness for a Better Tomorrow!!